‘A view of the Murderers’ Bay’ 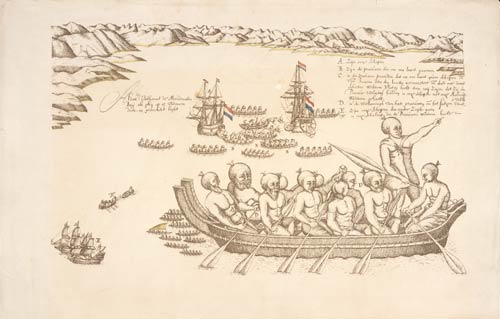 On his voyage of 1642 the Dutch explorer Abel Tasman discovered part of the western coast of New Zealand. The first European images of New Zealand and of Māori were the work of the artists who accompanied him. One of these, Isaac Gilsemans, probably drew the scene in Golden Bay when an affray between Dutch and Māori saw four Dutchmen killed. In the foreground are Māori in a canoe. In the background are Tasman’s two ships, between which the bloody incident took place. The detail of these drawings gave Europeans their first impressions of New Zealand’s inhabitants.