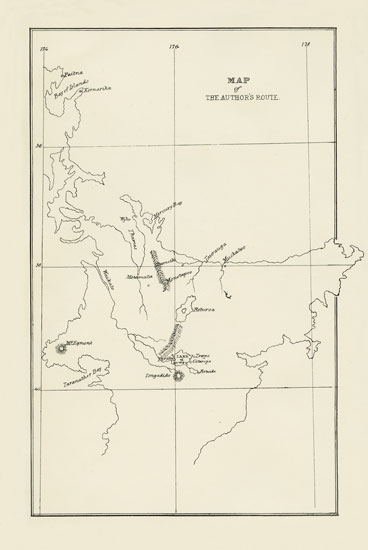 John Carne Bidwill, a merchant based in Sydney, first came to New Zealand in 1839 to explore the natural environment. This map, printed as the frontispiece of his book, shows the limited and somewhat distorted understanding of New Zealand’s inland geography by European explorers at the time.

Bidwill sailed to Tauranga, where he arranged for seven Māori to guide him and carry food. They travelled to Rotorua and then Taupō. From there, Bidwill determined to climb Mt Ngāuruhoe. When he reached its base the two Māori still remaining chose not to go further for fear of the volcanic mountain’s tapu (spiritual restriction), so Bidwill climbed alone. He wrote of his findings:

‘The cone is entirely composed of loose cinders, and I was heartily tired of the exertion before I reached the top. Had it not been for the idea of standing where no man ever stood before, I should certainly have given up the undertaking. … The crater was the most terrific abyss I ever looked into or imagined. The rocks over-hung it on all sides, and it was not possible to see above ten yards into it from the quantity of steam which it was continually discharging. … I did not stay at the top so long as I could have wished, because I heard a strange noise coming out of the crater, which I thought betokened another eruption.’