The risks of smoking 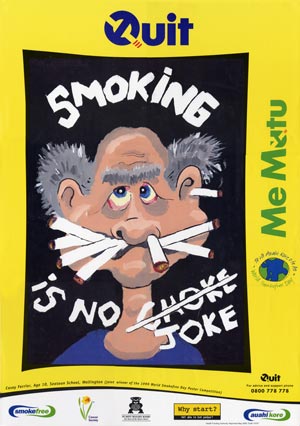 Smoking has been recognised in New Zealand, as elsewhere, as a danger to health. The habit contributed to cancer being the leading cause of death in New Zealand in the 1990s. Posters were produced to make people aware of the risks of smoking, and in 2004 smoking was banned in all workplaces, including restaurants and bars.

Permission of The Quit Group must be obtained before any re-use of this image.

John Wilson, 'Society - The health of the nation', Te Ara - the Encyclopedia of New Zealand, http://www.TeAra.govt.nz/en/ephemera/2520/the-risks-of-smoking (accessed 23 May 2022)