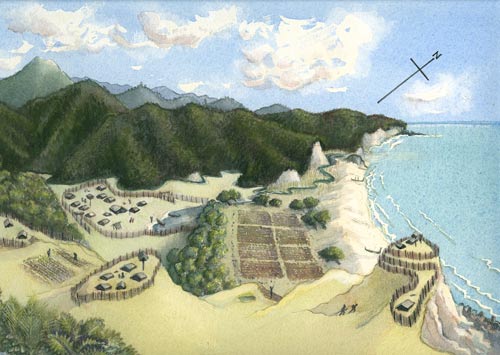 This is a composite of a number of aspects found in pre-European Māori settlements (kāinga). These villages were often coastal, and had access to both the sea and rivers. The highest mountain was usually associated with the hapū (sub-tribe) that lived in the settlement, and was often the burial place of the most important chiefs. Particularly in the North Island, gardens were important, and were often set on north-facing slopes to maximise the sun. Over time, fortified pā became increasingly important. They were often built on steep, inaccessible slopes with a view of the sea, from where attacks often came.