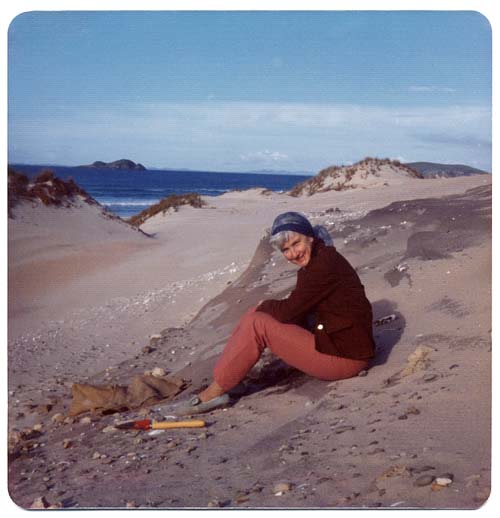 Northlander Neva McKenna and her husband often combed the shoreline at Coopers Beach, finding all sorts of treasures. Her biggest find came in 1976, at Henderson Bay.

For years my husband and I swam every day of the year at Coopers Beach and also fossicked. We found all sorts of treasures: petrified wood and coconuts, the bowl of a clay pipe with a hole for a flax cord, a natural Māori sinker, pieces of whale bone and whalers’ china, kauri gum, seeds from a tropical shrub or tree, the bottom of a Māori digging stick, and a very firm ball of pine needles which had rolled over the sand hills gathering more and more needles. From various far-north beaches we also collected a huge variety of shells.

Our greatest find, though, was a huge collection of moa bones. We were swimming at Henderson Bay, in 1976 I think, and noticed something white in the sand hills. We investigated and found a Māori oven and lots of bones. The Auckland Museum looked at some and told us most were moa and a few were sea lion, which interested them more.

Filled with enthusiasm, we returned often to Henderson Bay and walked the 6.5 kilometres of sand hills, finding more and more bones. On a plateau we found masses of moa eggshell, so this must once have been the home for many moa. One day I found a perfectly articulated half-skeleton of a moa in a sand hill, but we never found the other half. Obviously the sand hill had fallen, complete with bones.

A student studying for his doctorate in ornithology, Phil Millener, often stayed with us, with a motor bike on the back of his car. Up to Henderson Bay he went over and over again, to return with ‘There are no moa bones at Henderson Bay.’ We insisted that every moa bone we had came from there, and one day he excitedly returned with some.

Each time we returned from Henderson Bay I made a sketch of the site of each discovery, the date and so on. Each collection was boxed individually. Phil included a report on them in his thesis, in which he noted that our collection was the largest outside a museum.

In 1990, when I thought I was leaving Coopers Beach and felt the bones should remain in the Far North, I gifted them to the Far North Museum in Kaitāia, where they remain. Incidentally, Phil Millener now works at the Smithsonian Institution in the US.

Over a headland from Henderson Bay is little Kōwhai Bay. There, in a dried-up stream bed, we found what was obviously once a Māori workshop, with lots of obsidian shards used as knives, and a small greenstone adze. At Henderson Bay we also found a Māori skeleton buried in a sitting position. Having inspected it, we covered it up and never spoke of it.