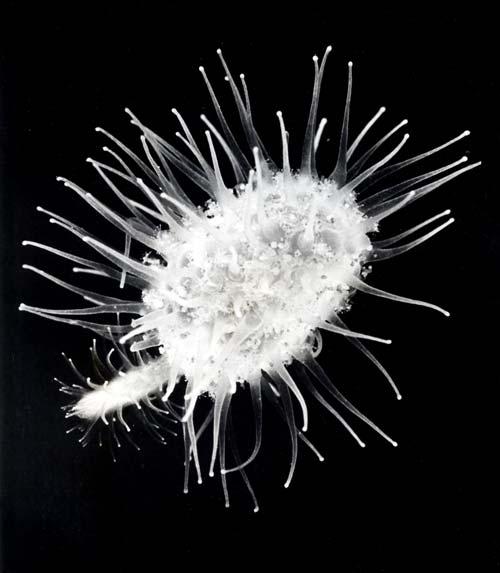 Bob Pilgrim found this strange creature (Pelagohydra mirabilis) on Sumner beach near Christchurch in 1966. It was only the third known example of this organism to be found.

Contributed by Bob Pilgrim of Christchurch.

In April 1966 at Sumner beach near Christchurch, I noticed an extraordinary-looking tiny animal floating in the sea. It was in very shallow water and would certainly have been cast ashore on the oncoming low tide. It recalled an animal I had read about in the world’s zoological literature. Only two previous specimens had been found, and both were taken from Sumner beach.

I managed to scoop it into a small jar of sea water, and returned with it to the laboratory, where I placed it in a much larger volume of sea water in a cool darkened room. It survived for more than a week.

It was about the size and shape of a small gooseberry, with a short stalk or proboscis which is its feeding tube. The whole body was covered with long flexible tentacles, between which were some shorter tentacles covered with tiny medusae, known as jellyfish. It was clearly a member of the large Cnidaria (previously known as Coelenterata) group of animals, mostly marine. This includes the sedentary sea anemones and corals, and the free-living jellyfish and bluebottles (Portuguese men-of-war). All are to be found in New Zealand seas.

The nearest relatives of this specimen are more common, and are found in the North Atlantic and North Pacific oceans.

The first specimen was also found at Sumner in 1901. Its discoverer, Professor A. Dendy of Christchurch, described this remarkable animal as Pelagohydra mirabilis. His specimen, now sectioned and preserved on microscope slides, is in London’s Natural History Museum.

In 1929, a second specimen was found on Sumner beach, but it was evidently damaged on the drying sand. My specimen, the third known example, floated at mid-water depth in the aquarium, sometimes resting with its proboscis on the glass bottom. After about a week, many of the medusae were shed, budding off from the body and swimming vigorously about. This is clearly the method of reproduction and dispersal of the species, but no free-living medusae are yet known to have been found in marine collections.

This fascinating animal remains surely the most rare member of our endemic fauna. The three discoveries on a short (about 1 kilometre) stretch of beach cannot truly reflect its normal range, but further searches are needed to reveal its true habitat.