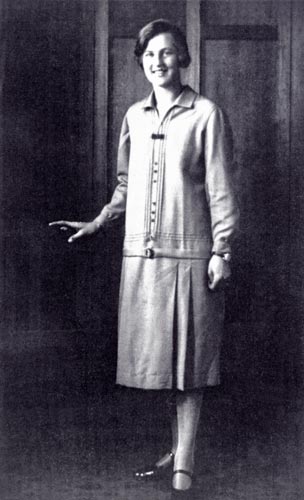 Pictured is Adeline Vera Taylor (Mrs E. T. Heathcote) who made the voyage from England to New Zealand as a young child in 1906. This photograph was taken in 1927, shortly before her marriage.

This reconstruction of Adeline Taylor’s experience was contributed by her daughter, Cynthia Harper of Pāpāmoa

In October 1906, we left England on board the ship Everton Grange. An extra deck had been added and it was crowded with passengers. The ship rolled badly as it was top heavy.

The stewards couldn’t cope with the crowd. Potatoes were served in their jackets and covered with dirt. My baby brother almost died because the Allenbury food (a special type of baby food), wasn’t cooked properly.

Father worried about the effect of the poor food on us all, so he and some other men asked the captain’s permission to help out in the cook’s galley. They sat around a huge barrel peeling potatoes with their pocket knives. They also carved the huge slabs of meat. When they’d finished, a steward would give them a cup of tea and a biscuit. Father always saved the biscuit for us.

One day, when playing, some boys fell through an open hatch into the engine room. The captain decided that something had to be done to keep the older children occupied. So from then on, the first mate drilled them for about two hours, marching them around and around the top deck. They were given a few prunes or dates to eat afterwards. I was too young to take part. In one corner of the deck there was a grating and I would lie on my stomach and watch the large shiny engines working.

Our first stop was Las Palmas (Canary Islands). Fruit was brought out to the ship and Father brought a huge bunch of green bananas and hung them above the top bunk to ripen.

Some pretty ladies came out to the ship and made a fuss of my sister who was a very pretty child. We heard later that the ladies were prostitutes. The port had a bad reputation and the captain warned passengers to be careful.

Some young men went ashore. They got separated and when it came time for the ship to sail, one young man had not returned. His friends begged the captain to delay departure while they went ashore to look for him. The captain gave them a time limit and said if they were not back he would sail without them. They arrived back just in time. Their friend had been drugged, robbed, and stripped to his underpants.

We ran into bad weather going around the Horn. We were all ready to file in for a meal, when everything slid off the tables. All passengers were shut down below and we were given hard biscuits for that meal.

On arriving in Sydney, we spent six weeks in a boarding house then embarked on the Maheno. The crossing was very rough. The ship was crowded, people lying on the floor or any available space, most of them terribly sea sick.

We landed at Lyttelton on Christmas Eve and Father went looking for accommodation. Eventually he found a place and the lady there gave us all a slice of her Christmas pudding.