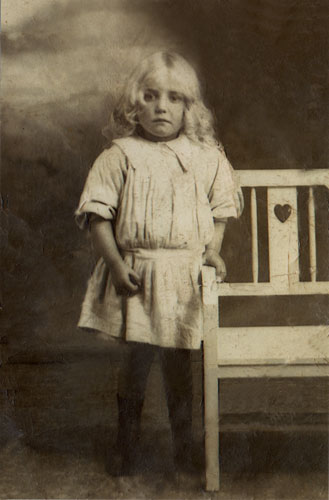 Dorothy Fenton (now Gore) as a young child in Blackpool, England. She was 10 years old in 1920, when her family left New Zealand on the steamship Paparoa.

Contributed by Dorothy Gore and her daughter Phyllis Kamper, both of Tauranga

I was 10 years old and lived in Blackpool with my mother, father, three brothers and half-brother and half-sister. It was a misfortune relating to my 18-year-old half-sister that resulted in my family emigrating to New Zealand. She had married a scoundrel from New Zealand. He was an army deserter, using a false name. At the time my parents were planning a move to South Africa, but this turn of events altered their plans.

We left Southampton on 11 November 1920 on the steam ship Paparoa. The very next day out in the Atlantic we ran into the most terrible storm. It continued for nine days. Everyone on board was sick. The huge seas caused the cargo hold to move, and the Paparoa was listing on a 45° angle. All passengers had to move and stop behind a guard rope on the high side of the ship. An SOS was sent out, and the captain decided to change direction and head for the USA.

In such a manoeuvre there was some danger, the captain warned, of the ship turning over. Prayer groups were taking place all over the ship. It was suggested a Catholic priest be thrown overboard, as it had been said it was unlucky to have him on board. People had their life jackets on.

The manoeuvre was successful and so we headed for Newport. Arriving, the wharf was packed with reporters awaiting our arrival. Crockery, food and cargo were ruined, taking several days to repair and replace before starting out again.

On the way we called at Pitcairn Island. It was Christmas Day. We did not go ashore. Little boats came out to us laden with goods. As it was the Sabbath they would not take money for their goods but asked for clothing. I can remember a number of Islanders leaving the ship singing hymns and their voices fading out into the distance.

The voyage took us eight weeks, arriving in Wellington in January 1921.