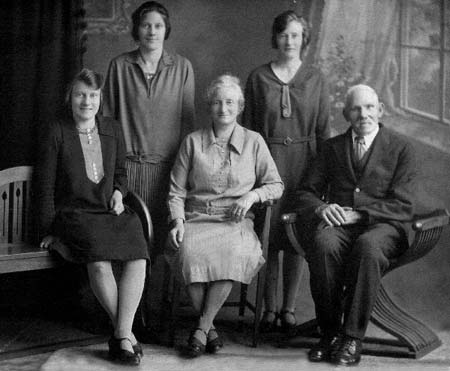 Many Scandinavians, like this family pictured, were lucky to survive the tremendous hardships on board the barque Punjab in 1873. Conditions were so bad that the Immigration Office prosecuted its captain and owners. One in nine passengers died of typhoid before they could set foot on New Zealand shores.

Many people who could not speak a word of English made the journey to New Zealand. For them it was a bold step into the unknown. One significant group were the Scandinavians, including Sven August Nilsson, who was born in 1851 in the large parish of Torsås, Sweden.

When Sven was a young man Sweden suffered a series of agricultural catastrophes, particularly in 1867–69. Then in 1870 his father died and he was left without parents or grandparents. It is no surprise that he decided to leave and make a better life elsewhere. In 1872 he went to Schlesvig (then a part of Prussia), but when the Prussians tried to draft him into the army he fled across the border to Denmark. There he pondered how Europe was torn with strife and economic depression and decided to emigrate to New Zealand.

In the late spring of 1873 he sailed on the Indireckte from Copenhagen to London, but conditions were poor and the passengers were huddled together in what amounted to a cattle boat. They ran into severe weather and the boiler burst, so they were left helpless and adrift at sea for three or four days until being taken in tow by a schooner. They eventually made it to London but were greatly weakened.

Straightaway Sven sailed from Gravesend on the barque Punjab, the first ship chartered by the New Zealand Shipping Company. They departed on 2 June 1873. Sven had high hopes for a good voyage, but things went from bad to worse. The passengers were seriously overcrowded below decks, they couldn’t exercise on the upper deck because there were too many pigsties and sheep pens and there were numerous other problems, such as water leaking into the sleeping apartments. Measles broke out in the English Channel among the Danish children and they weren’t halfway through the voyage before a woman came down with typhoid pneumonia. Both diseases raged through the ship, leaving 28 dead.

The ship arrived at Lyttelton on 20 September 1873 after a voyage of 108 days, but the ordeal continued for Sven because the passengers were quarantined on Ripapa Island, and he contracted typhoid while there. Fortunately he survived, but several more people died. In total, 37 passengers died – one in nine. Because of the tragedy, the Immigration Office prosecuted the captain and owners of the ship, and in a report to the Provincial Secretary, an official stated, ‘I sincerely trust that an Immigrant Ship will never again arrive here in so lamentable condition’.

After being released from quarantine, Sven managed to find work as a coachman and he learned English from the children he met. Ironically, it was not adults but children who enabled him to stay in the country. He eventually moved north to the Wairarapa, became a naturalised citizen, raised a family and died in 1932.