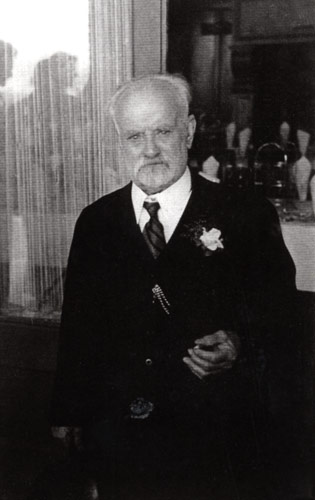 Thomas Heath was born in Kent, England. With his wife Eliza Mary Stevens and 11 children he made the three-month voyage to New Zealand. A 12th child was born while they were quarantined on Somes Island in Wellington Harbour. As well as a colourful writer, Heath was a skilled plasterer. His work adorned many Auckland buildings, such as the lion's head atop the now demolished Lion Brewery building in Khyber Pass, and the ornate pillars of the Baptist Tabernacle.

Contributed by a great-granddaughter of Thomas Heath, Sandra Gleeson of Whangarei

A middle-aged married couple had a son who was about sixteen years of age and of course was down amongst the single men. The poor fellow was supposed to be a little weak in the upper storey and of course was a bit of a butt for the others. I found him a very willing boy and he would do anything for me, such as fetch up my store and the wood and coal for the fire. On cold nights I used to let him sit by my fire until lights out. He used to clean out my porridge pot every morning and in so doing he used to dip a bucket of water from over the side, a feat that he got very clever at.

One morning he was at that job as usual when all at once he was missed, not having finished his job and the rope and the bucket was missing also. Of course I had to report it down aft to the Captain and he ordered a thorough search of the ship from stern to stern but no lad could they find and it was regarded that in dipping the bucket over the side and the rate at which the ship was travelling it had pulled him overboard and that he was drowned. Of course his poor old father and mother were heartbroken for he was their only son. The case was duly entered up on the ship’s log as lost overboard.

The next night the boatswain and I were sitting in the galley by the fire having a smoke and a yarn when all at once we heard a peculiar noise above our heads. I must tell you here that on the top of the galley and the deck houses are stowed all the light spare spars. The noise caused the boatswain to cry out, ‘What’s that’. He said that we would go up and see and soon called out, ‘Why, darned if there ain’t the lost boy up here.’ He had hidden up there out of fright at losing the rope and bucket overboard. It was pulled out of his hands by the rush of the sea. Well we got him down, more dead than alive, cold and hungry. I fixed him up with hot bread and milk and soon he was none the worse for his day and night out in the cold and wet. I then reported it down aft to the Captain and Doctor; the latter saying, after he had seen the boy, that he was none the worse for his escapade. Of course I got a severe wigging for letting him do the cleaning of the pots.

His poor parents were overjoyed at getting the boy back safe and sound. It was like coming back from the dead to them, and all on board were very thankful that all turned out so well. Although the poor lad did no more pot cleaning, I did not bar him from the fire or any of his tit-bits, and thus ends happily the Episode of the Lost Boy.

Everything on the ship was down to the depths of gloom. The Hospital was full of patients and everyone else was going about with faces as long as fiddles. Especially the single girls, who all seemed more dead than alive, and wanted something to happen to liven them up. Well our Second Mate, a very jocular fellow and full of fun, he had a brain wave so he propounded a scheme to me, to cause a bit of diversion amongst the girls and so put a little life in them.

When we left the old country we had some livestock on board for the use of the Saloon passengers. Amongst them were six small pigs; five of them had been killed and eaten. The one left was of a sickly nature, it seemed to have lost all life and energy. Well you know the Second Mate comes on watch at midnight and this was his scheme: that he and I should take the poor pig and lower it down the single girls’ hatchway after they were all sound asleep. When they woke up in the morning and saw the piggy crawling around he reckoned there would be a lot of fun.

Well between us we lowered poor piggy down the hatchway all right and without any noise. You see poor piggy had not even a squeal left in him, so all being well I turned in and left the Second Mate on his watch. He went off at four in the morning. I need not say that the first girl to awake and see the piggy raised a great hullabaloo and the others soon followed suit. The turmoil brought the Captain and the Doctor on deck in their night attire. Of course the Second Mate was in his bunk in the land of dreams and I was busy getting breakfast. I was sent for and asked did I know anything about it but of course I knew nothing. Anyway the Captain sent two of the crew down to catch the poor piggy and I need not say they caused some fun amongst the girls in doing do. When they brought piggy up on deck, the fun was all over. The butcher was told to kill the poor piggy and throw him overboard and so the shark astern had a good meal. The fun of the thing done good and was the talk of the ship for days. The captain offered a reward to find out who did it but it never leaked out as there were only two in the know. The end of Poor Piggy.

Amongst the married folks were a couple with two children, girls; both the mother and the girls were in the hospital with the fever. The father, a Lincolnshire shepherd by occupation, he brooded over the others being in the hospital and unfortunately went slightly wrong in the head. Two of his shipmates were told to keep an eye on him.

It was Sunday morning, and I had just done serving out the breakfast when the poor fellow came and sat down at my galley door. I asked him had he had any breakfast and he said no. I made him a bowl of bread and milk and he seemed to enjoy it. He gave me back the bowl and I turned away and before any one could stop him he got up on the rail of the ship and jumped overboard.

The cry rang out, Man overboard; the mate threw him a life belt but he made no attempt to clutch it, although it fell by the side of him. No. 7 life boat was cleared away in quick time but just as they were going to lower away the Captain came on deck and stopped them. Through his glasses he had seen the poor fellow astern, throw up his arms and disappear. He said it would be folly to risk the lives of six men for one who was already gone and as we were running before half a gale of wind, by the time that the ship was brought to, the boat would be far astern and might not be able to make the ship again. So very reluctantly the men came back aboard and the boat was again made fast in the chocks.

On account of so much sickness on the ship there had been one or two sharks following us for days. The Captain says that when the poor fellow threw up his arms it was then that the shark got him. A further gloom was cast over the ship.

When things again became normal the future of the widow and the children were considered. A subscription was taken up right through the ship; the exact amount raised was near fifty pounds. It was decided to start the widow as a Laundress on arriving at Wellington and to give her the ship’s washing as a nucleus towards that same.

And now a strange coincidence, some few years later I was called to Wellington to work for the Government. In the dining room of the boarding house where I put up, I noticed a life size portrait on the wall of a man. On looking closely it was the man I last saw on that Sunday morning sitting at my galley door far out upon the ocean. His widow was married again and was running the boarding house and doing well. It was nice to meet with an old shipmate under those circumstances and thus ends this sad incident of a tragedy on the voyage in mid-ocean.