To find the sun 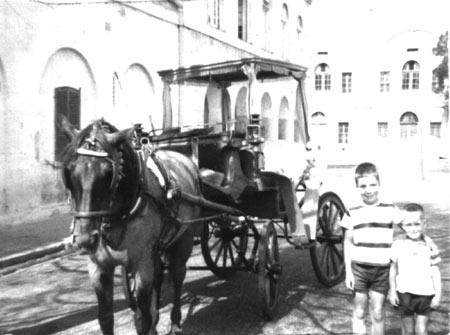 For George and Eileen Anderson’s six- and eight-year-old boys, pictured here during a stop-over in Malta, the voyage from England to New Zealand in 1968 was full of wonders. The boys experienced a vicious storm in the Bay of Biscay which smashed up the grand piano, they saw flying fish swimming alongside the ship off the coast of Africa, endured the Australis’s onboard ‘school’ and were fascinated by the workings of the ship’s huge motors.

Contributed by George and Eileen Anderson

1968: a depressing, overcast British summer. We – a just-turned-30 couple and our six- and eight-year-old boys – are on board the Australis, a Greek liner, former flagship of the American navy.

The ship sails a day later than scheduled. Was it to avoid Friday the 13th?

We are well into the Bay of Biscay when a storm strikes our vessel without warning. Deckchairs by the dozen are swept overboard, a grand piano smashes to matchwood in the ballroom and one passenger breaks a leg. There are many empty seats at mealtimes.

Gibraltar. Sunshine. The tiniest tugs, really just well-cushioned motorboats, fuss and push the Australis to her moorings. We – who have never gone beyond a day trip to Calais – look in awe at the Rock, the Barbary apes and across a no-man’s-land to the armed guards at the entrance to ‘Franco’s Spain’.

Down the coast of Africa. The wonder of hundreds of flying fish abruptly, simultaneously launching out of turquoise waves to soar airborne alongside our massive hull.

The ship’s newspaper, freshly printed in bright blue ink, is pushed under our door daily. Keep-fit classes for early risers. Later, school for all children – in theory. We discover our youngest wandering far below the passenger decks, fascinated by slowly pounding diesel motors. The cinema shows a different feature film every day – and an ill-advised documentary of New Zealand’s latest tragedy: the sinking of the Wahine.

An Olympic coach ties a rope around my waist; I learn to swim in the warmth of an on-deck pool. Holidaymakers returning to ‘Enzed or Godzone, mate’ tell us of life in New Zealand. We are sternly admonished not to whinge; we promise faithfully we never will. The couple in the next cabin quarrel loudly, bitterly, into the night.

Capetown. The bus to the foot of Table Mountain has seats for whites only. Up in the cable car, we look north into a vast African distance, the sky deep blue with a scattering of small clouds. An interminable voyage east across the Indian Ocean, chilled by a steady southerly wind from Antarctica.

Land. Fremantle, Australia. There’s time to be adventurous and take a train into Perth. A total stranger takes us around the city and nearby countryside in her VW Kombi.

Days later: Melbourne. Then Sydney, where Eileen’s uncle drives us to his citrus plantation and encourages us to settle in Australia.

But we sail on. Sing ‘Now is the Hour’ at the final concert. Exchange addresses (‘that’s how it’s spelled; goodness knows how you pronounce it’). Watch the morning sun turn the approaching grey landmass into an unbelievable emerald green.

Five weeks at sea comes to an end. A city – it must be Auckland – is suddenly ahead. Eileen’s sister will be there to meet us. Our Land Rover went ahead by cargo boat. The shipping agency has parked it at a now-expired meter. A ticket is under the wiper; one tyre is flat ...

Thirty-six years ago, we began a new life in a new land.

Impressions from the deck

From refugee to reverend