From refugee to reverend 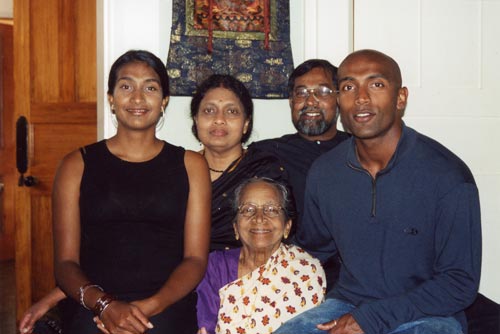 The Anandayagams arrived in New Zealand after four rootless years as refugees from Sri Lanka. Having been separated so long from family and friends, they were able to bring out Kumar’s mother to live with them. From left: Anchali, Gowri, Kumar’s mother, Kumar and Lakshman.

We are Sri Lankan, originally from the northern province of Jaffna. We identify ourselves as Tamils, a minority ethnic group characterised mainly by the Tamil language and Hindu religion. The ethnic majority are Sinhalese, who speak the Sinhalese language and practice Buddhism. Sri Lanka gained independence in 1948. The British left behind a predominantly Sinhalese government, and before long sporadic conflict began between the two ethnic groups over issues of equal rights.

My wife and I were both educated in mission schools. Gowri studied medicine and I studied theology, becoming an Anglican priest. We were married in 1975 in Colombo, the capital. Our son Lakshman was born in 1976 in Jaffna. Our daughter Anchali was born in the province of Badhulla in 1977.

In 1983, we were living in Nuwara Eliya, a hill-country town in the centre of the island, surrounded by tea plantations. At this time, racial conflict escalated to the point of full-scale riots in retaliation for terrorist activities by Tamil freedom fighters. Many people were killed and many more lost their homes and businesses. Our family experienced a narrow escape from a violent mob, intent on seeking out and killing all Tamils in that predominantly Sinhalese area. Ironically, we escaped purely because of help from our Sinhalese neighbours and friends, who put their own safety at risk in protecting us.

We were forced to re-evaluate our plans for the future. As the political situation continued to be troubled, we realised our homeland was no longer a safe environment for children and we would have to leave.

We obtained ‘tourist’ visas to India and said goodbye to our extended families, friends, pets and possessions. We arrived in Madras, India in September 1984 with two suitcases and unofficial refugee status. I was not allowed to work as a priest in India because their post-colonial, pro-indigenous policy prohibited foreign missionaries from working there. Gowri found work at a mission hospital in a town called Ranipet in southern India. We remained there for three years, renewing our tourist visa every six months. Our application for permanent residency in India was denied and living on six-monthly tourist visas was hardly the position of stability that we left our home to find. Luckily, the children were so taken with the novelty of a foreign country that they were distracted from the difficult situation we were in.

We began looking for emigration opportunities to other countries and wrote to our friends already living overseas for help. Roger Herft, a friend from theological college, was at the time Bishop of Hamilton, New Zealand. He looked for vacancies within the Anglican Church in New Zealand and found an associate priest position at a St Stephen’s Church in Ashburton, with the help of Archdeacon (Ven.) Alan McKenzie.

Having only ever lived in tropical countries, New Zealand was an unfamiliar prospect. What little we knew of it was gleaned from the labels of New Zealand dairy exports. As far as our children were concerned, it was a land of snow, sheep and not much else. But they continued to be enthusiastic about a new adventure in a country where they would get to see snow for the first time in their lives.

We arrived in Christchurch on 11 May 1987 and were welcomed by the Vicar of St Stephens, Ven. John Branthwaite, and his wife Gaye. Along with many members of the Ashburton community, they went to great lengths to help us settle into a new country and adjust to a new way of life. New Zealanders are a generous and friendly people and we were fortunate to settle here. We obtained New Zealand citizenship in 1991 and are happy to call this country our new home.

To find the sun