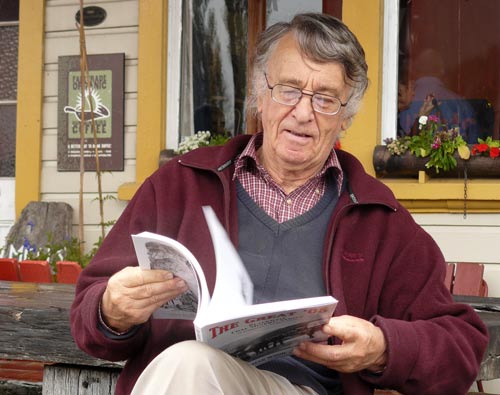 In addition to his teaching career, Brian Wood has had a long involvement with preservation of historic and mining heritage, especially the area around the Brunner mine. He is the author of several books on West Coast history, including the 1896 Brunner mine disaster and the 1908 Blackball strike.

My grandfather came to Westport from Nelson in the 1890s to establish a small retail business. Like my father, I was born in Westport. My mother was from Reefton. I was brought up a townie Buller boy. Family connections and friendships inclined to Nelson and Īnangahua. We didn’t have much to do with the area further south, around Greymouth and Hokitika, where they played rugby league. It was sometimes identified as a place called Westland, with Canterbury connections. The district even further south, with the glaciers and Jackson Bay, was part of 'another country'. The parochialism and rivalry between different areas was intense. It was only after taking up a teaching position in Greymouth in the 1970s that I became aware of the similarities and differences between different parts of the West Coast.

Living in Westport, there were continual reminders of the gold-mining past, both from visits to Charleston and the large Irish Catholic community. But Westport was a coal town, with a busy port and railway transporting coal from Stockton and Denniston to the rest of New Zealand. A popular Buller High School teacher. Alan Lake, had left-wing views on the Spanish Civil War, the USSR and the 1951 waterfront strike. He and teacher (later mayor) Jock Watson had useful contacts for me with members of the Labour movement.

Since moving to Greymouth, the conservation and interpretation of heritage sites and buildings related to mining has been of special interest. Retaining buildings and structures in situ and interpreting events in their heritage setting involves not only historical research but the skills of industrial archaeology. Restoration of the Brunner suspension bridge took almost seven years to achieve. Other important West Coast coal mining sites investigated include Denniston, Millerton, Blackball and Rewanui, where much has unfortunately been lost to scavengers and scrap merchants.

There is much still to be done. The Blackball mine chimneys are in urgent need of conservation, and some gold-mining sites in the Īnangahua district may be threatened by large scale gold-mining projects.