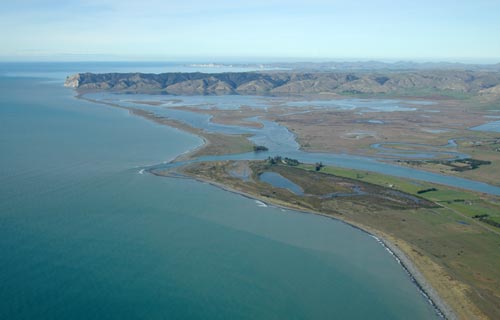 Rangitāne o Wairau are based in the Marlborough area. This view looks south over the Wairau River and the Vernon Lagoons towards the cliffs at Parinui o Whiti. The lagoons were an extensive mahinga kai (food-gathering place) and pā complex, criss-crossed with canals created by early Rangitāne – Rangitāne know it as their ‘Vatican City’. At the mouth is the site of the ‘moa hunter’ excavations which recovered taonga (treasures) now held in Canterbury Museum.

Rangitāne o Wairau settled its historic treaty claims on 4 December 2010. The settlement, valued at about $25 million, included provision for the iwi to hunt or kill for customary use titi (muttonbirds) on Titi Island and the Chetwode Islands.

One of the oldest and most prominent iwi of the Marlborough region is today known as Rangitāne o Wairau. The name Wairau describes the rohe (tribal area) of Rangitāne, and is derived from the phrase ‘ngā wai-rau o Ruatere’ (the hundred waters of Ruatere), meaning the confluence of streams, rivers, wetlands, lakes and estuaries across the present-day Marlborough region. These provided a rich array of cultivations, shellfish, fish and bird life.

Accounts vary as to why Rangitāne migrated from their lands in the Wairarapa to the Marlborough or Wairau region. Before the main migration, the Marlborough region was inhabited by a mixture of Ngāi Tara and Ngāti Māmoe from the Wairarapa coast, people who were all close relatives of the Rangitāne iwi. Then, a storm off Cape Palliser blew the Rangitāne chief Te Huataki across Raukawakawa Moana (Cook Strait) to Anamahanga (Port Gore).

Te Huataki and his crew journeyed through the Marlborough Sounds to the Wairau, and after a brief sojourn returned to Te Whanganui-a-Tara (Wellington). Convincing his people of the rich new lands in the south, Te Huataki led a series of migrations in the early 16th century, accompanied by Wairarapa chiefs Te Whakamana, Tukanae and Te Rerewa. These people settled across the top of the South Island. They merged with the resident Ngāi Tara and Ngāti Māmoe, more as a result of intermarriage than warfare, and quickly established Rangitāne as the principal iwi of the region.

The arrival of James Cook in Queen Charlotte Sound in 1773 heralded the first of many interactions between Rangitāne and Pākehā. The explorers d’Urville and Bellingshausen were followed by sealers and whalers – but by far the most destructive impact of Pākehā colonisation was the invasion of musket-armed raiders, who all but decimated the resident Rangitāne population in the early 19th century.

The Treaty of Waitangi was signed on 17 June 1840 in Cloudy Bay by Īhāia Kaikōura, and a deed of sale was signed between the Crown and Rangitāne in February 1856. For the sum of £100, and the promise of a 20-square-mile reserve, 33 people of Rangitāne gave up their customary rights to an area extending from the mouth of the Wairau River inland to the Arahura River on the West Coast. Even though they paid the £100 back to the Crown to secure the reserve, the land was never transferred and the matter remains unfinished business for Rangitāne to the present day.

Despite the trials and tribulations of the past four centuries, the descendants of Rangitāne have maintained their occupation on the lands bequeathed to them by their ancestors: Te Huataki, Te Whakamana and Tukanae.