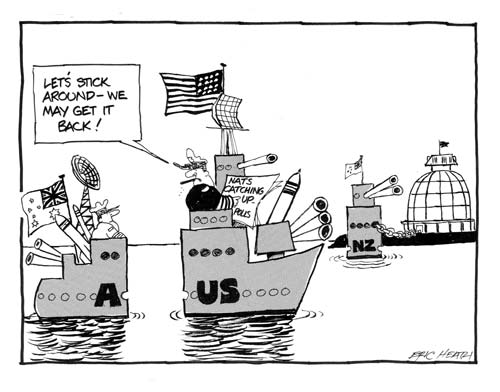 In 1985 the US suspended New Zealand from the ANZUS defence treaty. The 1951 agreement pledged military cooperation between the US, New Zealand and Australia. Anti-nuclear protests in New Zealand prompted the new Labour government to ban visits to New Zealand ports by nuclear-armed or -propelled vessels. The US responded by dropping its ANZUS obligations to New Zealand. Eric Heath's cartoon shows a US Navy commander indicating that an incoming National government might overturn the nuclear ban and repair the treaty. However, the ban has remained in place under both Labour- and National-led governments, although military cooperation between New Zealand and the US was officially restored in 2010.