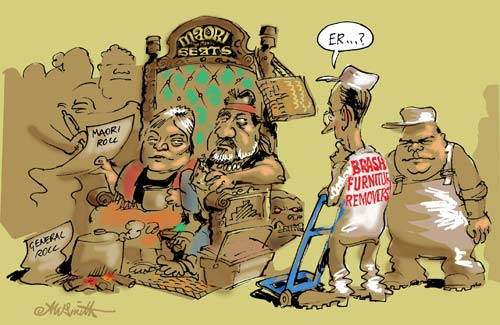 The issue of the Māori seats has divided New Zealand politicians since soon after the seats were created in 1867. This 2006 cartoon shows Māori Party MPs Tariana Turia and Pita Sharples sitting on one of the seats. Then National Party leader Don Brash (second from right) and ACT leader Rodney Hide puzzle how to shift them. Turia is shown enrolling new voters onto the Māori roll (enabling them to vote for the Māori MPs), while the general roll smoulders on a fire. At each of the five-yearly electoral options from 1997 to 2006, the numbers of Māori enrolling on the general roll declined by several thousand, while those on the Māori roll increased.