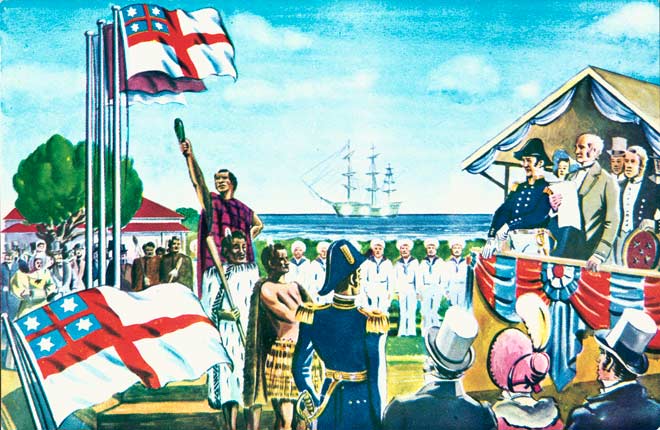 This postcard depicts the selection of a national flag by Māori chiefs at Waitangi in 1834. There are three flagpoles flying flags and a chief, one of the members of the United Tribes, is pointing his mere pounamu (greenstone weapon) towards the front flag, which was selected as the national flag. The building at left is the house of James Busby, the British Resident (a British official), which came to be called the Treaty House. To the right dignitaries stand on a covered stage. The man holding the paper is probably meant to be Busby, who had called the chiefs together to select a flag. The artist may have based his image on a much later portrait, as Busby was only in his early thirties at the time. The naval officer standing beside Busby is probably Captain George Lambert, whose ship, HMS Alligator – seen at sea in the background – fired a 21-gun salute following the selection of the flag.

The chiefs of the United Tribes met the following year to sign the Declaration of Independence.