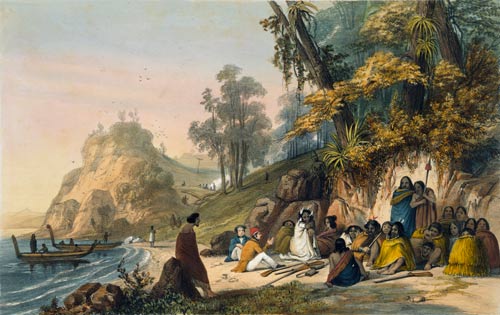 After setting up his first mission station at Rangihoua in 1815, Samuel Marsden opened a second at Kerikeri in 1819, on land provided by the chief Hongi Hika. Hongi traded with the missionaries to buy muskets, and used these to wage war against rival tribes. Wounded in 1827 in a battle  with the Whangaroa tribe Ngāti Pou, he died a year later. This 1827 painting by Augustus Earle shows Earle and a friend sitting on a beach near Kororāreka and talking to Hongi, who is wrapped in a white cloak.