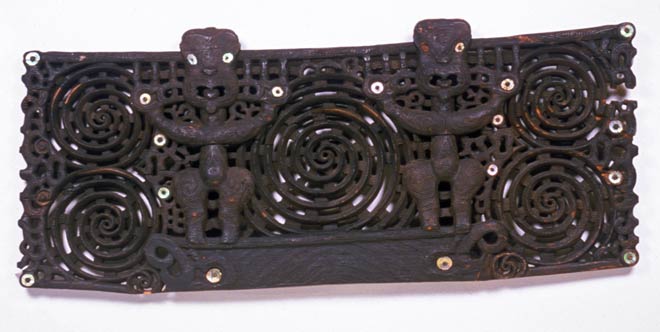 This lintel, which was carved with stone tools in the Bay of Plenty in the 1850s, shows Ranginui (the sky) and Papatūānuku (the earth) during the stage of creation known as Te Pō (darkness). The spirals represent light coming into the world. The following Ngāti Raukawa version of the subsequent separation of Rangi and Papa was dictated by Hūkiki Te Ahukaramū in the 19th century:

The sky (Rangi) cohabited with the earth (Papa), who was the wife of the sea (Tangaroa). She was seduced by the sky. They had a child whom they called Tānenui-a-rangi (Tāne, great of the heavens). … The family thereupon decided that the sun should be allowed to shine through the armpit of the sky. Tānenui-a-rangi said, ‘The sun shines above’. He then said, ‘Let us raise our father above and leave the female, Papa, as our parent’. They joined in and said, ‘Raise him up, separate the two. Let the female be set apart, let the male be set apart so that we may prosper in the world’. The sky was then raised above. Hence, the sky stands above and the earth lies below.

awesome i can do my homework

awesome i can do my homework

this is truly beutiful

this is truly beutiful