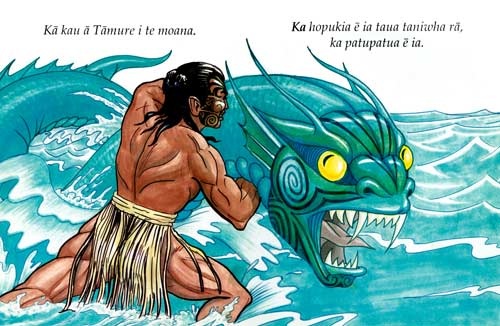 Tāmure wrestles with Kaiwhare, a man-eating taniwha who lived in an underwater cave at Piha. Tāmure lived at Hauraki and was reputed to have a mere pounamu (greenstone weapon) with the power to defeat any taniwha. He came to Piha at the request of the local people and fought the creature. He hit it with the mere, and though he did not kill it, its wounds prevented it from eating people. From then on it lived on crayfish and octopus.

This item has been provided for private study purposes (such as school projects, family and local history research) and any published reproduction (print or electronic) may infringe copyright law. It is the responsibility of the user of any material to obtain clearance from the copyright holder .