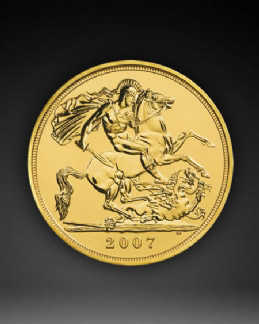 Gold sovereigns were historically used as currency in New Zealand. In Te Ao Hou in March 1959, Leo Fowler, born in 1902, described a story told to him about how the dragon slain by St George on the sovereign represented a taniwha:

‘Personally, I have never seen a taniwha, nor I expect have readers. I have met some who told me they had seen one, and they were people I had every reason to respect and to believe. My old friend Nepia Pomare, (a Ngapuhi and my Maori godfather) once told me that the taniwha on our gold sovereigns was not unlike a taniwha he had once seen. This taniwha, whose name he could not utter, (so tapu was it) had a body very like that of the taniwha on the sovereign, but the wings were only partly formed and the head was the head of a manaia [stylised carving of a supernatural being].’