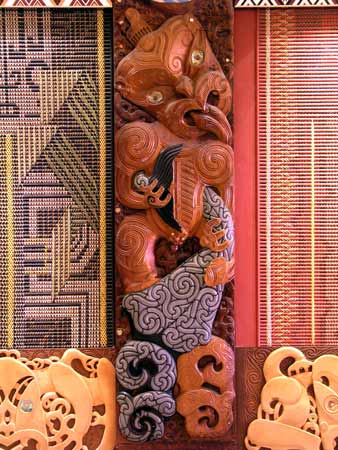 In Māori tradition, Paikea was known as Kahutiaterangi and was the son of Uenuku. As depicted in this carving, Uenuku placed a comb in Kahutiaterangi’s hair to indicate he was of high birth. However, when another son, Ruatapu, asked why he had not also received a comb, he was told it was because he was illegitimate. In revenge, Ruatapu tried to drown Kahutiaterangi and others at sea by sinking their canoe. Kahutiaterangi survived by calling on a sea god, who sent a whale to carry him to shore. On reaching land he changed his name to Paikea.

Paikea on a meeting house