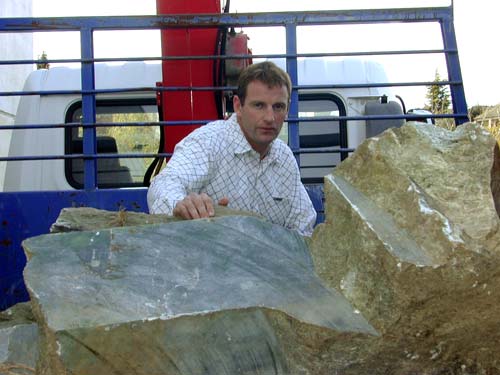 Detective Senior Sergeant Steve Wood rests his hand on pounamu seized by Wanaka police during an investigation. Three truckloads of illegally mined stone were confiscated. It was believed to have a market value of several million dollars. As a result of the Ngāi Tahu (Pounamu Vesting) Act 1997, this tribe owns all pounamu in its natural state in the South Island.

Your web site acknowledges that large scale theft of pounamu has occurred yet you display a piece of that stone that was the product of those thefts. The contemporary piece you display is snowflake pounamu, stolen by Hutton or the Saxtons. Rob Nicholl, Licenced Private Investigator for Ngai Tahu