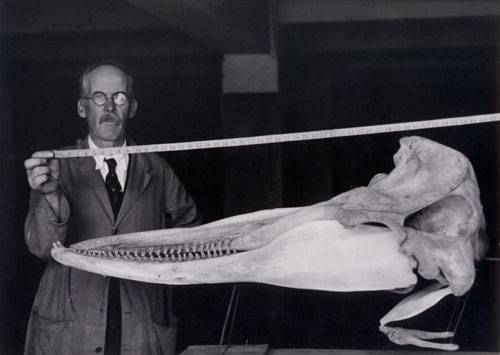 George Shepherd was for 20 years the full-time curator of Wanganui Museum. In 1933 he read in the Hawera Star a description of a whale washed up near Ōhawe on the south Taranaki coast. Shepherd visited the site, collected the skeleton, and became convinced that it was a new species of whale. The director of the Dominion Museum, W. R. B. Oliver, confirmed his conjecture and named the species after Shepherd, pictured here with the skeleton. The Shepherd’s beaked whale remains very rare and only one live specimen has ever been seen – near Nelson in 1994.