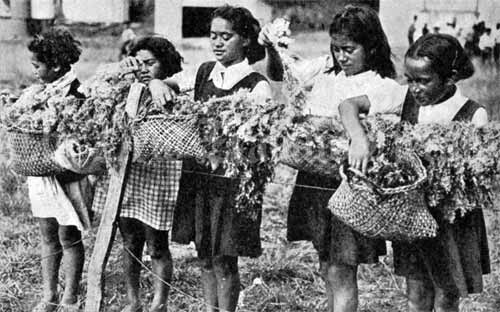 Until 1940 most of the world’s supply of agar – used for growing bacterial cultures and in the meat-canning industry – came from Japanese red seaweeds. When Japan entered the Second World War, the supply of agar to Allied countries was threatened. In 1941, New Zealand scientists established that two native species of red seaweed yielded commercial quantities of agar, and the government paid for their collection. Most agar seaweed was gathered by East Coast Māori. In this photo from 1941, school girls from Raukōkore Native School, Bay of Plenty, are hanging out agar weed to dry.