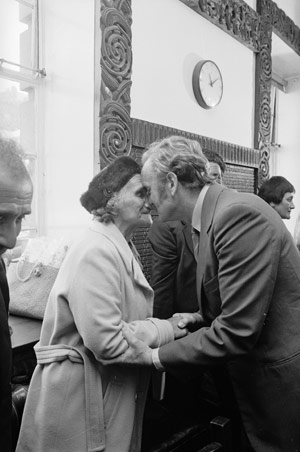 Muriwhenua tribes have played a significant role in Māori politics since the 1960s. In 1975 Whina Cooper of Te Rarawa became a major national figure when, at the age of 79, she led a land protest march from Te Hāpua to Wellington. Here she greets the minister of Māori affairs, Duncan MacIntyre, with a traditional hongi (pressing of noses) before discussing land issues in February 1976.