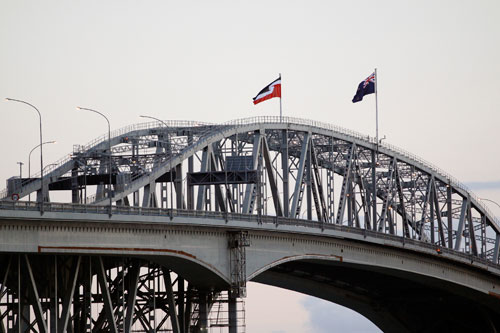 The national Māori flag flies over the Auckland Harbour Bridge beside the New Zealand flag. In 1989 this flag, designed by Hiraina Marsden, Jan Dobson and Linda Munn, won a competition run by protest group Te Kawariki to select a national Māori flag. It was unveiled at Waitangi on 6 February 1990 during the 150th anniversary of the signing of the Treaty of Waitangi, and became known as the tino rangatiratanga (self-determination) flag. In 1999 someone scaled the flagpole at Waitangi and replaced the New Zealand flag with this flag. In 2007 Transit, the government agency that managed the bridge, refused a request by Māori rights group Te Ata Tino Toa to fly the flag from the Auckland Harbour Bridge on Waitangi Day. However, as a result of consultation during 2009, this flag was selected as the official national Māori flag. In 2010, as well as being flown over the Auckland Harbour Bridge, it was also at Parliament, the Beehive (the building that houses the government’s executive) and the National War Memorial. The Ministry for Culture and Heritage maintains specific protocols on flying the national Māori flag.