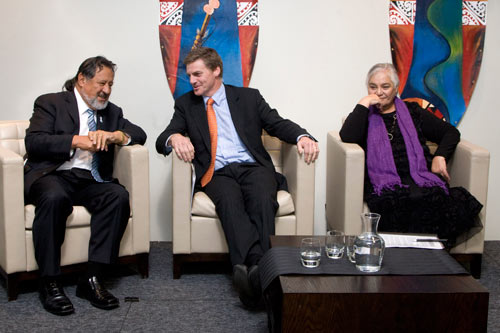 Following the 2008 election, National invited the Māori Party to become part of a coalition government. National's aim was to gain enough parliamentary votes to form a government. The Māori Party accepted, and co-leaders Pita Sharples and Tariana Turia became ministers of the Crown. Being part of the government enabled the Māori Party to promote and put in place policies such as Whānau Ora, aimed at assisting whānau and families to raise healthy, well-adjusted children. This shows the launch of the initiative in 2010. Deputy Prime Minister Bill English (centre) is flanked by Sharples and Turia.