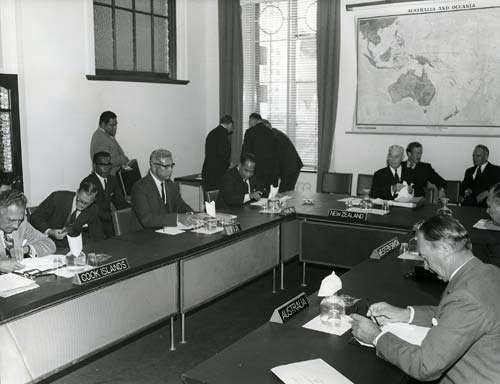 The first meeting of the South Pacific Forum (shown here) was held in 1971. Seated around the table, from left, are Albert Henry (premier of the Cook Islands), Ratu Sir Kamisese Mara (prime minister of Fiji), Hammer DeRoburt (president of Nauru), Keith Holyoake (prime minister of New Zealand) and C. S. Barnes (minister of external territories, Australia). Also present, but not visible in this photo, was Prince Tuipelehake of Tonga. The forum started as a local version of the Commonwealth and was a way of supporting political stability in the region. All the countries involved were former British territories, some very recently independent.

Multilateral organisations in the 2000s