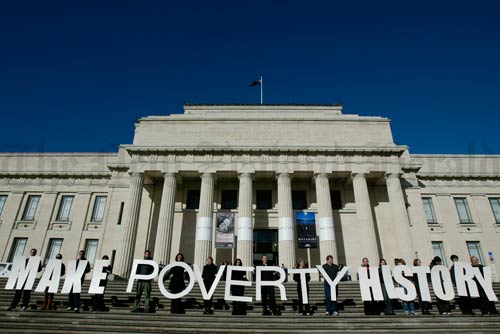 Campaigners stand on the steps of the Auckland War Memorial Museum on 1 July 2005 to mark the start of International White Band Day, which draws attention to poverty worldwide. The 'Make poverty history' campaign evolved from a change in focus that occurred in world aid during the 1990s. Much aid was reprioritised to projects that would do the most to improve the living conditions of the world's poorest people. The 'Make poverty history' movement is an international one, calling for trade justice, more and better aid, and third-world debt relief. Campaigners have called for the New Zealand government to commit itself to 0.7% of gross national income devoted to aid by 2015.