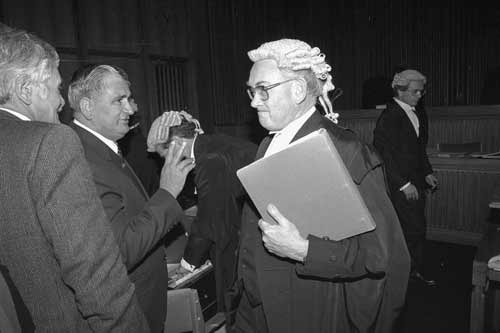 The chair of the New Zealand Māori Council, Sir Graham Latimer (second from left), gives the V-for-victory sign on hearing the result of the council's case against the Crown in June 1987. The council won what came to be known as the 'Lands' case, a ruling that had a signficant flow-on effect on how the Treaty of Waitangi was interpreted by the courts, and on subsequent settlements of treaty claims. In 1988 the State-Owned Enterprises Act was amended to make land transferred from direct public ownership to state-owned enterprises subject to ‘resumption’ – meaning it was still available for treaty claims.