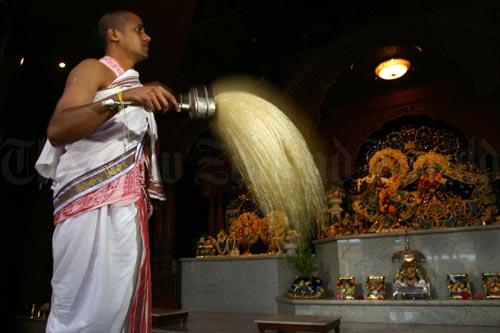 Large crowds attended the Hare Krishna temple in Riverhead, West Auckland, for the Sri Krishna Janmastami festival in August 2006. Here head priest Divya Govinda performs a ritual for the festival, which celebrated the reappearance of the Hindu deity Lord Krishna and the 110th birthday of the movement's founder, Bhaktivedanta Swami Prabhupada. The New Zealand Society for Krishna Consciousness was formed in 1972, and the Riverhead temple, Sri Sri Radha Giridhari, opened in 2004.