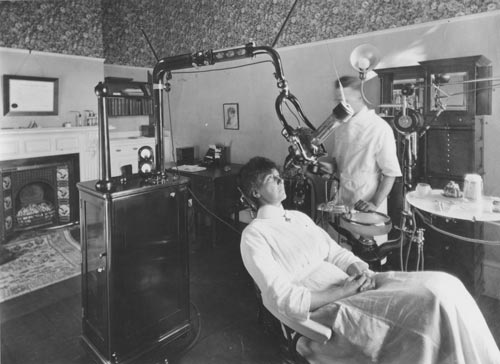 In the early 20th century New Zealand dentists started to use X-rays to identify decay in patients' teeth that was not immediately visible. X-rays are a form of electromagnetic radiation used to take images of the human body. The most familiar use of X-rays is to check teeth and bones, which absorb the waves of electromagnetic radiation and show up on X-ray negatives as light and white. Dental caries (decay) appear in X-ray images as dark places on light, white teeth. Using X-rays as diagnostic tools, dentists can drill into teeth and remove decay. A variety of substances are then used to fill the holes created. Initially gold or mixtures of gold and other metals were used, but later amalgam (usually a mixture of mercury, silver, tin and copper) became more common, especially for back teeth that were not easily visible.