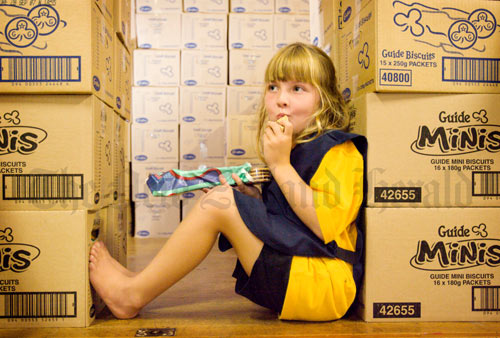 Jane Findlay, from St Mary's Pippins group, samples a Girl Guide biscuit at Scout Hall in Crown Lane, Remuera, in 2007. Selling Girl Guide biscuits door-to-door each March was the major fund-raising event of the Guiding calendar until 2019. The original recipe was developed by Cadbury Fry Hudson and the biscuits were first sold in New Zealand in 1957. In the 2010s up to 1.7 million packets of biscuits were sold annually. They came in three varieties (plain, chocolate and mini) and featured the Guides' trefoil (clover-shaped) symbol. More than 40% of the profits from biscuit sales went to the Guide group that sold them.