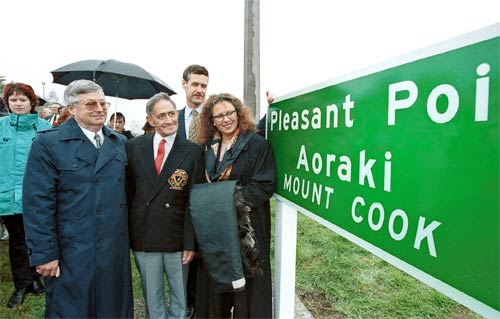 In 1987 Māori became New Zealand’s second official language, with the same legal status as English. The traditional name given by the Ngāi Tahu tribe to New Zealand’s highest peak is Aoraki, a title which has equal status with its other name, Mt Cook. In 2000 the first bilingual road sign was placed near Temuka in South Canterbury, to direct travellers to the mountain. Admiring the sign are (from left) Transit New Zealand regional manager Robin Odams, Richard Whitau of Ngāi Tahu, Transit national highway manager Rick van Barneveld, and Associate Minister of Māori Affairs Sandra Lee.