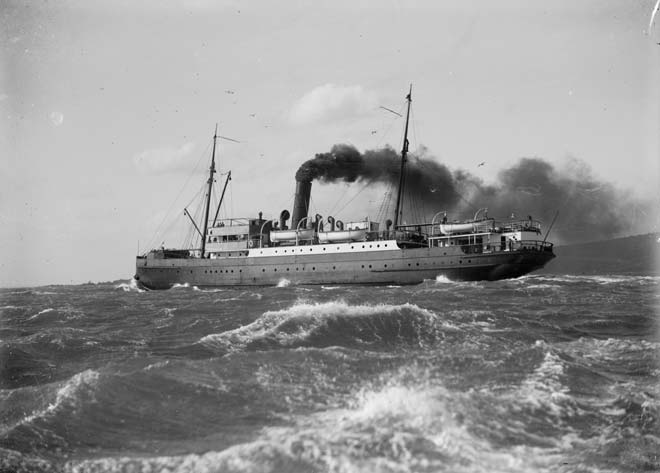 The Arahura, a 1,600-ton steamer, was built in 1905 for the Union Steam Ship Company. After 20 years doing the run from Wellington to Greymouth via Nelson and Westport, she was bought by the Anchor Line, and spent the next 25 years travelling between Wellington and Nelson. Partly dismantled in Wellington, the Arahura was deliberately sunk in Cook Strait by Royal New Zealand Air Force mosquito bombers as target practice in January 1952.

Capt William TINNEY (1860 - 1930) Patea Harbour Master. Captain William Tinney was born in London, in May 1860, son of Fredrick Tinney. While in Nelson, NZ, he met and married Emma Whiting. The Whiting family had arrived as early colonists from Alton, Hampshire , via London, UK, into NELSON NZ MAY 1856, on the barque "Inchinnan" Her parents were Henry & Emma. Henry was a local Blacksmith in Nelson. William and Emma moved to PATEA after their marriage. William Tinney went to sea in 1871, in the training ship “Warsprite,” and, after serving three months, joined the navy, in which he remained for several years. Arriving in Nelson in the ship “Chili,” in 1874, as an ordinary seaman, he obtained employment in the coastal and inter-colonial trade, first as ordinary seaman, then as mate, and finally as master of the schooner “Sisters.” After that he had charge of the steamer “Elsie” trading between Nelson and Rewaka for three and a half years. In 1889 he entered the employ of the Anchor Company, as second mate of the s.s. “Waverley,” and eighteen months later was made first mate, which position he filled for three years. He plied the coastal waters of NZ over the turn of the century as captain and master of the "Aorere", a 82 foot 72 ton Screw Steamer build in 1886 in the port of Nelson and operated by the Ancor Company (Nelson). This vessel was wrecked at Rangitiki Beach 23/5/1920. 31 March 1899, Captain Tinney of SS AORERE, was fined 15 Shillings and costs for employing a seaman without entering into an agreement with him. He served as harbourmaster in Patea and retired due to poor health after 24 years. He died Nov 10th 1930, age 74, in Patea, New Zealand. Buried Old lawn Patea Cemetery (north west section) plot 431, next to Wife Emma (nee Whiting) and son George. William Tinney and his wife Emma had several children: 1. Daisy Valentine ( Married Edwin Henry Davidson ); 2. George, ( 1894-1913); 3. Percy Henry (1888-) married Florence Lily Smith PILLING (1919); 4. Norman married Lilly; 5. Emma (1892-1972) Married Henry FINDLAY; 6. Mabel; 7. Elsie ( 1997-) Married Louis Thorburn (1901-)

Was wondering if it was

Was wondering if it was possible to obtain a passenger list for the Arahura during the 1940 Centennial Exhibition in Wellington? An elderly lady I know travelled to Wellington from Picton as a child to the exhibition and was interested to see if her name appeared anywhere.