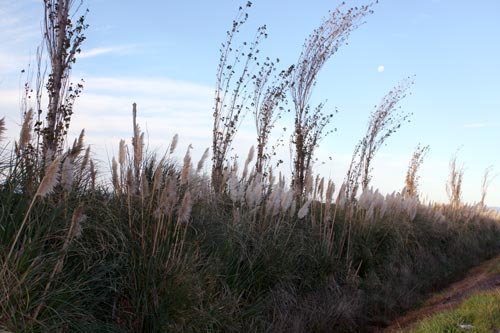 This row of pampas grass is serving as shelter for a market garden in Ōtaki, in the early 2000s. Pampas grass (Cortaderia selloana and C. juvata) was introduced to New Zealand by early settlers mainly for shelter, but also as stock fodder. However, the days of planting it are over. It is an invasive plant, and has spread into native forest – female plants produce millions of seeds which can travel up to 25 kilometres. Pampas grass was declared a pest plant in 2001, and can no longer be sold in New Zealand.

Hi there, kiaora, I am a DIY craftsperson photographing New Zealand Nature in the last 16 years, and only recently I got aware of Pampas Grass x Toe Toe . Thus I am keeping a more inquisitive eye on this. About two weeks ago I was having a look at some "Toe Toe" I did pics around one year ago and now I suspect it is Pampas Grass, but not really sure.