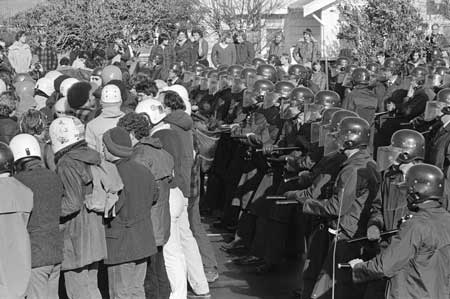 Anti-apartheid protesters turn away from police in Palmerston North, August 1981. Partly as a result of Māori migration into towns and cities, race relations began to loom large in New Zealand life in the second half of the 20th century. Sporting relations with apartheid South Africa became a touchstone of racial attitudes. In 1981, the Muldoon government allowed a tour by South Africa’s Springbok rugby team to go ahead, despite protests over sporting relations with a country ruled by a racist government. Widespread civil unrest erupted.