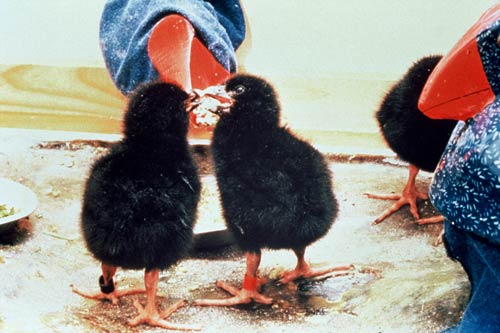 These South Island takahē chicks are being fed by a hand-held puppet that looks like an adult takahē. They are at a captive rearing unit at Burwood Bush near Mossburn, which was opened in 1985. Surplus eggs were taken from wild nests and hatched in rooms that had one-way glass, for observation. After seven weeks the chicks were released into an enclosure of 3,000 hectares of red tussock and beech forest. Having had no direct human contact, the birds adapted quickly. Fully grown adults were then released back into the Fiordland mountains, or sent to nearshore islands.

In 2005 the small population of takahē was classified as ‘nationally critical’.