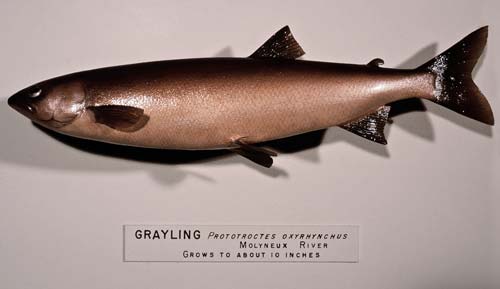 This fibreglass reproduction of the extinct New Zealand grayling (Prototroctes oxyrhynchus) – known by Māori as upokororo – is on display in Otago Museum. Although grayling were common in New Zealand rivers in the 19th century, they were rare from the beginning of the 20th century and the last confirmed sightings were in 1923.

The reason for their extinction has never been clear, but it is suggested that they could not compete against trout, which were introduced to New Zealand streams and rivers in the later 19th century.