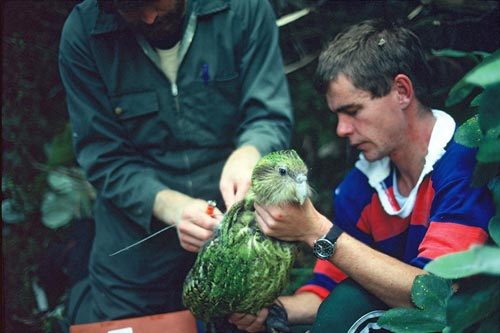 Kākāpō are unique, ground-dwelling parrots that were once widespread in New Zealand. With the introduction of predators such as rats, ferrets and cats, the species was heading rapidly towards extinction. In 2006 there were only 86 remaining birds, all on predator-free islands in southern New Zealand.

This photograph, taken in the early 1980s, shows a radio transmitter being attached to a kākāpō named Tawbert, so he could be tracked for several years. Tawbert was one of the last known kākāpō in Fiordland, where none have been seen since 1987.