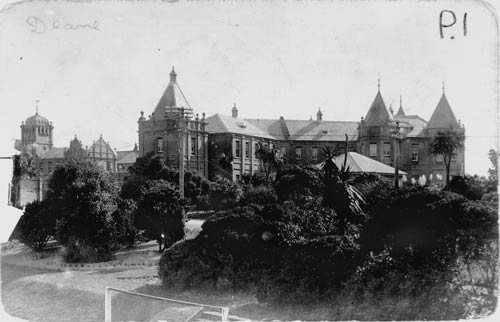 Some of the largest public buildings in 19th-century New Zealand were lunatic asylums (psychiatric hospitals). The Porirua asylum, seen here around 1910, opened in the 1870s to relieve overcrowding at the Wellington facility. Its rural site had room for vegetable gardens and sports facilities, and was seen as a better environment for the patients – some of whom had psychotic illnesses, while others were alcoholics or senile. By the 1940s the hospital housed 1,500 people. This building, constructed in 1891, was damaged in the 1942 earthquake and demolished. During the 1990s, large psychiatric institutions were closed and patients released into community-based care. Only a small facility remains on the Porirua site.