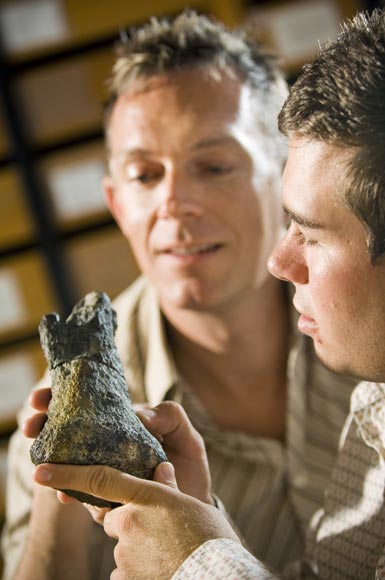 Pictured in 2006, paleontologist Jeffrey Stilwell (left) of Melbourne’s Monash University and student Chris Consoli examine a theropod toe-bone fossil they found on the Chatham Islands. As few dinosaur fossils have been unearthed in New Zealand, this was a major discovery. The 65–70 million-year-old fossils include a tiny claw and finger bone, and spinal, foot, and leg bones from an unknown species of two-legged, meat-eating theropod. The first dinosaur fossils were not found in New Zealand until 1975, in inland Hawke’s Bay. Since then only one other place, near the Waikato River mouth, has revealed a dinosaur bone. New Zealand dinosaurs are thought to have died out at the same time as others worldwide – at the end of the Cretaceous period, 65 million years ago. This means they would have been isolated for about 20 million years after the country broke away from Gondwana – enough time to evolve into forms unique to New Zealand.