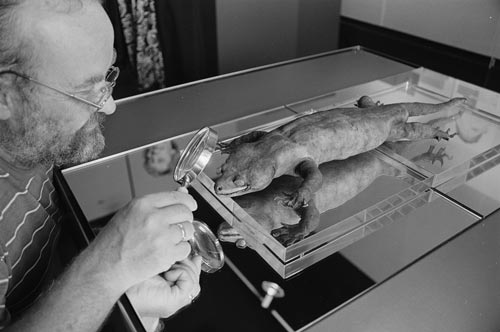 Taxidermist Wim Spiekman examines a gecko (Hoplodactylus delcourti) at the National Museum, Wellington in 1990. Somehow this specimen languished in the natural history museum in Marseille, France, from 1869 to 1986, when researchers claimed that it might have originated in New Zealand. It was sent to New Zealand in 1990 as part of the celebrations for the 150th anniversary of the signing of the Treaty of Waitangi. This gigantic reptile (it measures 37 centimetres from snout to vent) shares some features with New Zealand geckos. Bones that may have come from the same species were unearthed in Otago in 1988. A large gecko known as kawekaweau also features in Māori mythology. Because of the lack of other specimens and locality data, some researchers are not yet convinced that New Zealand was the true origin of this specimen.