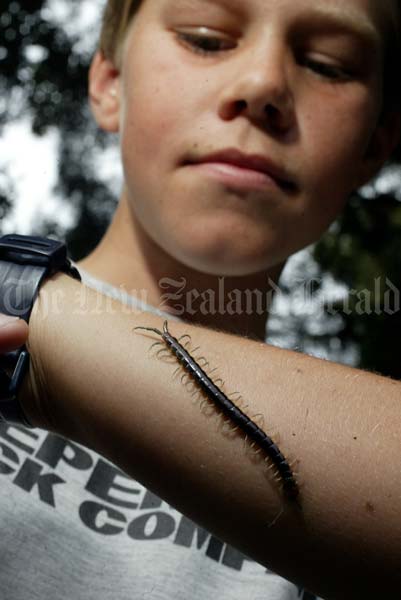 Thirteen-year-old Jordan Carter lets a centipede (Cormocephalus rubriceps) crawl up his arm during the 2006 BioBlitz. In this event, scientists target a certain area (in this case Corban Estate in West Auckland) and try to identify as many different species as they can find. Many people are unaware of what lives in their own backyard. BioBlitz demonstrates that native creatures live everywhere, not just in reserves. The giant centipede, which can grow to 25 centimetres, is an example of gigantism – a feature of many New Zealand native species. In the absence of mammals, large flightless invertebrates (such as wētā and centipedes) occupied the niche which in other land masses small mammals (such as mice and rats) exploited.