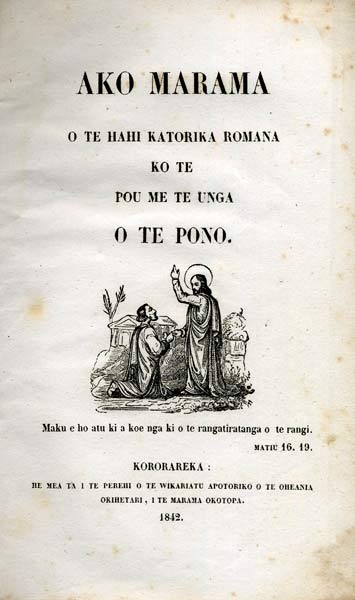 This catechism, or summary of principles, of the Catholic Church was written in the Māori language, probably by Bishop Pompallier, and printed in 1842 at the Marist mission at Kororāreka (later renamed Russell). The bishop brought a printer and printing equipment from France and housed them in a specially built rammed-earth building. Between 1842 and 1849 more than 3,000 books and other publications such as this were printed in both Māori and English.

The printing press later became the property of Waikato Māori, who used it to print Te Paki o te Matariki, the newspaper of the King movement. In 1967, more than 100 years after it left, Māori queen Dame Te Atairangikaahu returned the printer to the former printery in Russell. Now known as Pompallier House, it is the only surviving building from the Kororāreka mission and the oldest Roman Catholic building in New Zealand.