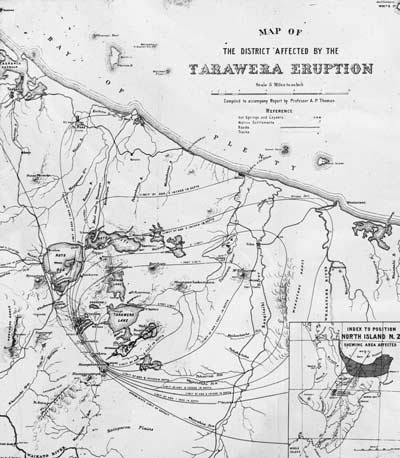 Ash from the eruption of Mt Tarawera covered much of the Bay of Plenty. A layer 2.5 centimetres deep at Te Puke was enough to smother pasture and deprive stock of feed. About three times that thickness was recorded at Whakatāne, and even more in the fertile river valleys to the south.

Professor A. P. W. Thomas visited the district soon after the eruption in 1886 and made detailed observations, from which he compiled this map showing contours in the ash thickness. The thickness of ash gradually decreases away from the vent area. People were killed close to the Tarawera rift, especially from violent surges of broken rock. The surrounding area was covered by ash, which killed the vegetation. As the map shows, it was fortunate that the towns of Rotorua and Tauranga received only a light dusting of ash, so that life there continued as normal.