Distribution of Cephalorhynchus dolphins around the Southern Ocean 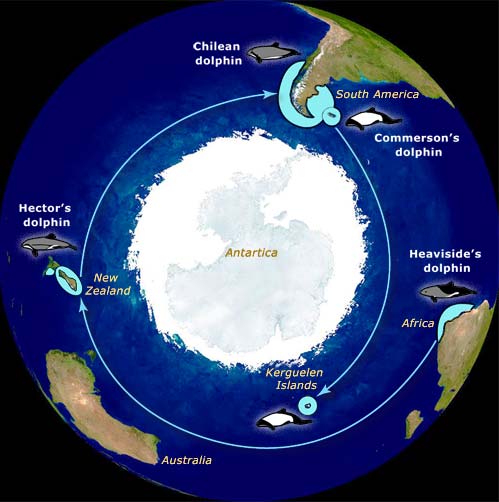 Hector’s and Māui’s dolphins belong to the genus Cephalorhynchus, species of which live all around the northern edge of the Southern Ocean. Researchers believe that the common ancestor originated along the coast of southern Africa (where Heaviside’s dolphin is now found), and that there has been progressive eastward migration, with new species evolving as a population is cut off from the others. Beyond New Zealand, Cephalorhynchus spread eastwards to South America and the Falkland Islands, giving rise to the Chilean dolphin and Commerson’s dolphin. More recently (perhaps in the last 10,000 years), the loop has started a second lap, with a population of Commerson’s dolphins established at the Kerguelen Islands in the southern Indian Ocean. In due course they too may become a separate species. Meanwhile in New Zealand, when Cook Strait opened up at the end of the last Ice Age, a North Island population of Hector’s dolphins became isolated and has formed the Māui subspecies.