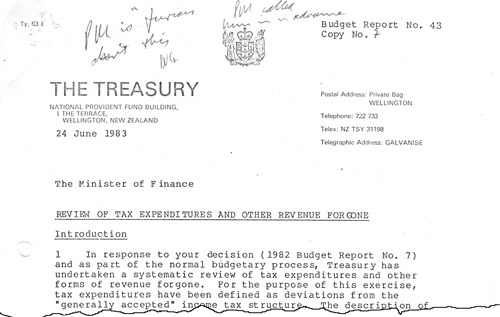 The relationship between ministers and officials can be variable. In the early 1980s Treasury officials often advised courses of action, usually in the direction of economic liberalisation, which were opposed by Robert Muldoon, minister of finance and prime minister. The friction was compounded by the differing perspectives of a minister who by 1983 had held the finance portfolio for 14 of the preceding 17 years, and a cohort of relatively youthful officials, who thought of themselves professionally as economists rather than as public servants. The consequences were often explosive, as evidenced in the annotation (probably by Treasury Secretary Bernie Galvin) on this Budget Report – ‘PM is furious about this.’