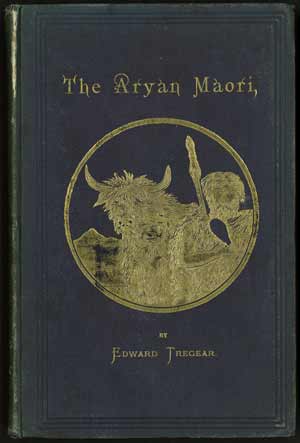 The Aryan Maori was written by Edward Tregear and published in 1885. Tregear was a former surveyor who had fought during the New Zealand wars and lived for some time in Māori communities. On the basis of an examination of Māori language and mythology, he argued in this book that Māori shared with Europeans an ancient Aryan heritage, and that their languages belonged to the Indo-European family. The image on the cover refers to Tregear's claim that the Māori language contained echoes of the Sanskrit word for cow. The myth that Māori were Aryan and therefore superior to other indigenous races was quite widespread in New Zealand at the end of the 19th century.